There have been three Methodist churches in the Modbury area. First Church built 1863, second 1962 and third built in1971. Before the first white settlers arrived in the area now known as Modbury it was inhabited by what was known as the Adelaide tribe of Aboriginals – the Kaurna people. The Aboriginal name for the area was “ Kirra–ung-dinga”, translated “As the place where Red Gums grow by the creek”. With settlement, the Aboriginal tribe gradually died out. By the 1850’s very few Aboriginal people remained in the area, only occasionally passing through. Most of the early settlers in Modbury came from England and were interested in the Christian Faith. Services of worship were conducted in private residences in the 1840’s. 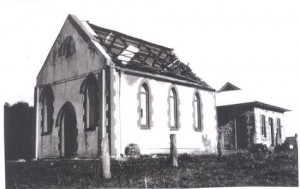 Robert Symons Kelly settled in the district in the 1840’s and named the settlement of Modbury after his home town in the south of England . The original church site was opposite the now T.T.Plus. The first two churches 1863 & 1926 were erected there. Robert Kelly was a public-spirited man, interested in the community and was chairman of the district council from 1860-62. When he donated the piece of land in 1863 to the church, the Wesleyan Chapel was built. Kelly stipulated the chapel should also be used for a day school.
In 1865 he gave another piece of land close to the chapel for a recreation ground. The original Modbury Oval and latter tennis court (now civic park) were there. Today the new council chambers Library and car park are part of this area also. In January 1867 the people of Modbury held a New Years Day gathering where they had a picnic and cricket match. The afternoon tea was laid out in the Wesleyan Chapel. Robert Kelly also gave the land for the Institute building, which now houses Youth and Community Affairs. Robert Kelly also gave the land for the old Modbury primary School, which is now part of Sfera’s on the Park. Robert Symond Kelly figured prominently in the foundation and running of the 1863 church, he was an original trustee and church steward. He was also the church organist from 1863 until the 1890’s when his daughter Carolyn took over the position and continued for the next 30 years. Mr. James Cronk was also closely connected to the church. His son Henry Cronk took a leading part in the church before the turn of the century and was Sunday School Superintendent from 1890 to 1906. George Morris was the original secretary of the 1863 church and also a church steward. He was the only living original trustee when the 1926 church opened. Jack Morris (son of George) was Sunday School Superintendent from 1906 –1910. Jack’s brother Frank was also a church trustee and Sunday school teacher in the late 1890’s. The Marrett family was also closely associated with the Modbury church. Mr. James Dicker and family were very active in the early church. The Dicker farm (later owned by the Buder family) is where the new church was built in 1971.

Other people associated with the first church – the South family, Elliot’s, Nelson’s and Mr. & Mrs. Edward Michelson. Mr Mitchelson was the first Post Master of Modbury and he was also the Registrar of Births, Deaths and Marriages for the district. The church built in 1863 had stone walls and an iron roof and was approximately 40 feet long and 20 feet wide. The pews were hand made and lighting for the evening service was by hanging three kerosene lamps. The first known Minister was Reverend John Waterford who conducted services in 1865. Two other early preachers were Robert Flockton and Mr. Walter Hill. The marriage of Mr. and Mrs. Gilmore was the first to take place in 1886. Mr. R. E Lucy (who was a Justice of the peace) and family from “Alderly farm”, (later known as Stonehenge ) were also active in the church.

Miss Ethel Lucy was the third church organist and played from 1920-1936. She was also involved in the setting up of the Sunday school room, which was erected at the rear of the church. The room was 24 feet by 20 feet and served as kindergarten section of Sunday school from 1924-1966. The new Kindergarten was opened in 1923 from funds raised by locals of the district Mrs. W. Lokan was one of the main organizers in raising these funds. A Miss Bowey (Mrs. John Tilley) was the winner of the Queen competition, which was held to raise funds for the new kindergarten as well. As early as 1914 a new church building fund had commenced. In that same year – 3rd May 1914 the church Jubilee (50th Anniversary) service was held. Other early settlers in the area were George Bowey (first special constable) Lokan, Lloyds, Elliots, Hancock, Roberts and Wilkeys all settled in Modbury. The Boord family served the church for 50 years. With the turn of the century many more families such as the Ropers, Holbrook, Harris, Wright, Wren, Richardson, and Manly families all had close association with church and Sunday school. Miss Jean Manly was the first bride to be married in the new 1926 church, The Avery and Phillips family were also active church workers. In October 1924 the roof of the church was destroyed by a thunderstorm. On the 7th of January 1926 the trustees decided to replace the original church building with a new brick one which was estimated to cost between 800-1,000 pounds. The Lokan Brothers carted all the materials for the building, which then served the town of Modbury until the late 1960’s. Due to the increase in population a new church was built in 1971. The church building is the third to be erected at Modbury since the start of settlement.

The foundation stone at the Modbury Uniting church on Montague Road . “To the Glory of God” Laid for the Pioneer Methodist of the Modbury District. The Reverend John Watt holds Church services on Sundays at 9am and there is also Sunday school.

Karadinga recreation Centre (after the aboriginal name) that is attached to the church is also run by the Uniting Church. There are squash courts, table tennis club, and various community groups who use the centre. The mural on the front of the building depicts the heritage of the local area with the old Methodist church in foreground.

References
Notes taken from “Modbury 1840-1926”. Published to coincide with the opening of the new Modbury Church by Dean Stringer
also Extacts from “Settlement to City” by Ian Auhl