You are here: Home / Projects / Wells and Waterways

Wells & Waterways of Tea Tree Gully District. by Beryl Jolly
Beryl is researching the waterways in the district – some of her research is presented below.

Within the City of Tea Tree Gully Council area there are over 7930 inlet drains (side inlet pits) which capture storm water from roads and reserves and over 433 kms of concrete and p.v.c. drains which carry the storm water into creeks within the city. The storm water captured, flows into over 150kms of creeks within the City of Tea Tree Gully, which form parts of the River Torrens, Dry Creek, Cobblers Creek and the Little Para River. Hope Valley is home to S.A.s first Mini Hydro Electric Plant. The $1.4 million Plant creates energy by using River Murray water that flows through a storage tank at Canopus Ave. It will generate about 7000 megawatts of electricity an hour, enough to power 1000 homes. This scheme will make way for similar plants using water flowing through other reservoirs

Gould Creek
Gould Creek rises to the east of One Tree Hill and is the northern boundary of the Tea Tree Gully Council area. It has several fresh water springs along its course and is the water catchment of the Little Para Dam.  It meets up with the Little Para, which rises at Paracombe and is the main water catchment for the Dam. This junction was at the centre of a property known as Cumberland Farm, owned by Reuben Richardson (my great grandfather). When I was a child, the old homestead was still there, although not fit for habitation. There were many old fruit trees still surviving in those days, especially a large mulberry tree growing at the junction of the streams and covering an area the size of a large house block.  Over the years, it had collapsed at the main trunk, but still produced lovely fruit. Many a Sunday afternoon and a two mile walk along the Little Para River was rewarded with a feast of berries when in season and of course, a bucket full to take home.
All this is now under the Little Para Dam, but I still have many happy memories of those days.

Cobbler Creek
Cobbler Creek rises in the hills west of Seaview Road, near the junction of Range Road North and travels through farming land and the old township of Golden Grove. It is believed its name was derived from a Cobbler named Peddler who lived near the creek on section 2109 Hundred of Yatala. Slate Creek joins Cobbler Creek near the Golden Way . This creek rises west of Seaview Road , closer to One Tree Hill road traveling past the old Golden Grove School and Golden Grove House. Many wells were dug along these waterways usually near the homesteads, supplying them with good water. Underground tanks collected rainwater from the farmhouses and sheds. Reserves along Cobbler Creek retain some of the natural growth and pleasant walking and picnic areas. Continuing down to Salisbury a lot of Cobbler Creek disappears in new housing development and emerges in an open drain and finally continues through wet-lands and into Dry Creek and out to the Barker inlet.

Cobbler Creek was proclaimed a park in 1989.It is a 288hectare park some 19 kilometers north of Adelaide at Golden Grove. The park is bound by Bridge Road, Smith Road, and Green Valley Drive, with The Grove Way dissecting the centre of the park.

Cobbler Creek was so called apparently because a shoemaker or cobbler carried on his business beside the creek that runs from the area that was called ‘Little Para’ down into Salisbury.

There are two names that fit the criteria –William Pedler 111 and Edward Barnett.

Although it was assumed that Edward Barnett was the Cobbler in question, it appears that this is not the case, as the area was referred to as Cobbler Creek in the Adelaide Directory of 1855 and Edward Barnett did not move into the ‘Little Para’ area until late 1858 – early 1859.

Dry Creek
Dry Creek rises in the Tea Tree Gully Range , near Glenara Vineyard collecting many tributaries on its way through Yatala Vale, passing through Elder Green to Wynn Vale dam. Following in close proximity to Golden Grove road, passing through properties of early settlers. Several large tributaries flow through Fairview Park, Banksia Park, Redwood park and Ridgehaven and meet Dry Creek near Drumminor on Golden Grove road, through Modbury North and Modbury where a tributary from Tea Tree Gully and another from Anstey Hill area joins near McIntire and North East roads. Another tributary comes from Hope Valley , Highbury area and joins Dry Creek near Kelly road. These tributaries collect a great amount of water and by the time Dry Creek reaches Grand Junction road, it is here it takes a sharp turn and one can see where the force of the water has eroded the banks. Dry Creek travels out of the Tea Tree Gully council area through Valley View, Walkley Heights , Pooraka, Mawson Lakes through the wetlands and finally out to sea at the Barker Inlet. 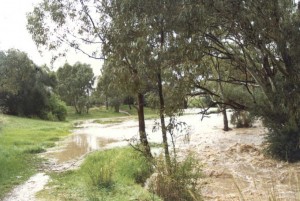 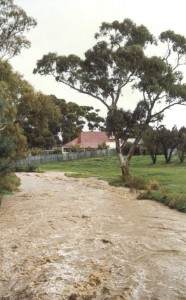 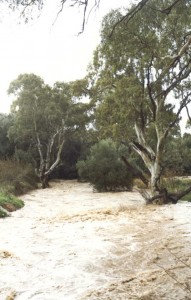 Little Para River
The Little Para River rises in the hills in the Paracombe area, with many small creeks to feed it through the winter. It winds its way through Inglewood, Lower Hermitage and Snake Gully, where it becomes the start of the Little Para Dam catchment, through Salisbury under Port Wakefield Road, through Bolivar and out into the Barker Inlet, Gulf of St Vincent. Along the fertile river flats, people have settled and planted fruit orchards, vegetable gardens and grazed sheep and cattle. Pumps were used to irrigate the orchards and vegetable gardens from the large water holes along the stream. In the dry summer months, the holes were often pumped dry throughout the day, only to be replenished overnight. The Little Para River may only be a small stream most of the time, but it becomes a force to be reckoned with when in flood. Flood waters often overflowed in the lower areas when in the plains. Many houses have been built in these areas, with the building of the Little Para Dam, the problem of flooding has lessened. The Little Para Dam has a capacity of 20800m, providing a good supply of water to the plains. The following photographs are of the Little Para River at various times… 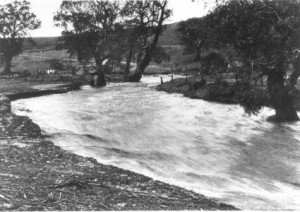 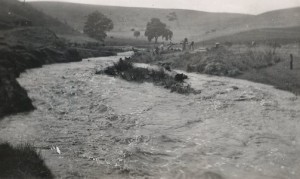 Hope Valley Reservoir
Hope Valley Reservoir was built in 1872 with a capacity at that time of 3470ml. With a major upgrade on the reservoir’s bank, the capacity will increase. Water was piped from Anstey Hill until the remedial work was finished, at an estimated cost of $8.8 million. The property known as ‘Baymore’ on the North East Road at Modbury, had a well still in use until 1965. Depth of well was 19ft with a water level of 16ft and was mostly used for stock and irrigation. Mr. L. Johnson had a property bounded by North East and Wright Roads and Dry Creek. The well was 175 feet. After the earthquake in 1954 water increased but became very salty. Mr. Johnson operated mining using the well water to wash the sand and metal.Several Horse Troughs were in the area at Tea Tree Gully Hotel, Modbury Hotel, North East Road and Golden Grove Road (old junction). A government well was situated on Golden Grove Road , near the junction of Hancock Road and adjacent to a well on the property owned by Mr. Carraill. At this point, water was obtained for council work, private needs as well as a vital commodity in the fire- fighting season. 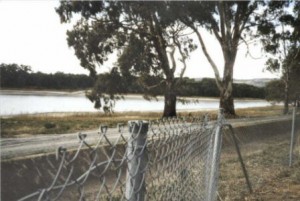 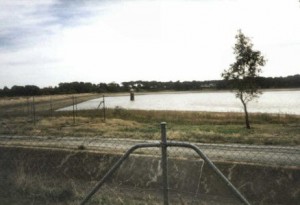 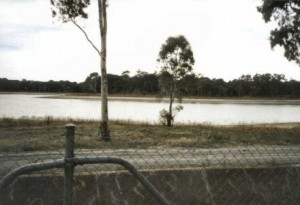 The Government Well at Golden Grove
By Margaret Carraill

One morning at the beginning of a workday early in March 1995, the government well came to an end filled in because it was in the way of progress. It hadn’t been used and was practically dry for many years; since a clay pit went deep and drained away that particular stream those wells were on. The water was excellent, suitable for any use. For many years the well was used by many locals and near neighbours during summer. A lot of properties in Golden Grove and Yatala Vale didn’t have permanent water, so once tanks and dams ran dry water had to be carted from the ‘Well’. Some even drove their cows from Yatala Vale to drink at the trough beside the well, after drawing the water with a bucket on a rope. It was quite a long job to draw enough water to fill a drum or tanks as the bucket would be a kerosene tin, with a handle on the top holding 4 gallons. The old kero tin was made much use of around farms, carrying water, grapes, chaff and many other uses. Quite often the handle would out live many buckets, because the tin would rust but the handle would last much longer. I don’t know when the well was dug, must have been very early in the beginning years. Must have been dug expertly as I cannot remember it being repaired in my time. My Auntie Clarice cannot remember when it was dug. Farmers and dairy men came from quite a long way to get water, when it came to putting the roof on the stacks of hay, they would come for water to damp the straw for thatching the roof. It was a much harder and longer job drawing water if the water had been used several times as the water level went down it took longer to draw up the bucket. Although the well could get well down at the end of a hot day after much use, by next morning it would be full again. In those days a good water supply was very important and the farm animals were limited to the water and the summers, only a few had wells of their own and not all the water was good. 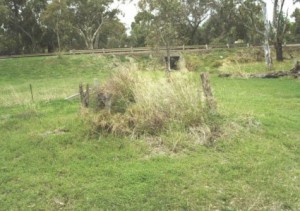 Note: A government well was situated on Golden Grove Road, near the junction of Hancock Road and John Road, adjacent to a well on the property owned by Mr. Carraill. At this point, water was obtained for council work, private needs as well as a vital commodity in the fire- fighting season. (Provided by Beryl Jolly)

Your IP address 172.70.34.230 has been flagged for potential security violations. You can unlock your login by sending yourself a special link via email. Learn More