Early History of the Baptist Church In Tea Tree Gully

(This is part of the ‘History of the Tea Tree Gully Baptist Church ’. We would like to thank Bob and Marie Millington, who have kindly allowed us to reproduce their research, with the consent of the Baptist Church. ).

Records show that the Baptists held services in their homes as early as 1858 in Tea Tree Gully and Hope Valley . One home mentioned is that of Mr. Job Mills. As numbers increased Mr. William Haines, Snr., gave them the use of his cottage in Tea Tree Gully.

To provide adequate room a partition-wall was removed. The cottage, which is still standing, is situated at 1360 North East Road almost opposite the Tea Tree Gully Hotel and was until recently the home of the late Mrs. Marie Clarke.

This prosperity was so encouraging that it was on May the 30th 1860 the Church was formed and was attended by fifteen people. The Rev. George Prince presided.

On Sunday May the 11th 1862, three sermons were preached in the Wesleyan Chapel, at a locality referred to as Steventon, Tea Tree Gully, one Baptist, one Wesleyan, and one Independent, in aid of the building fund for a new church in the area – The Tea Tree Gully Baptist Church. A successful tea meeting and fundraising effort followed on the Monday evening. The land on which the Ebenezer and Metcalf building now stand, was presented to the church by Mr. John Flavel and a nominal payment of ten shillings was made to satisfy legal requirements. Nine members were appointed trustees.

The first Baptisms were conducted by the pastor on the 28th of April, 1861. These must have been in the open, because the Ebenezer Chapel was not opened for public worship until 29th of March, 1863. It seems a tank was used or a baptistery dug and formed, before building the church. The building cost about 250 pounds. The pulpit and eight seats were given by the North Adelaide ‘Ebenezer’ Church. 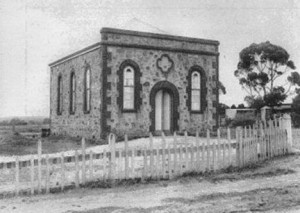 In 1865 the Church joined the Baptist Association which, in 1895, was incorporated as the Baptist Union of S.A.

A Sunday school was commenced in June 1866.

A remarkable service at the beginning of 1868 connects with more recent history. An elderly lady and her grand daughter were baptised on this occasion. The girl eventually became the mother of one who was prominent in Baptist affairs for many years and was largely instrumental in establishing the ‘Illoura’ Baptist Homes for the Aged, namely, Mrs. E.K. Wilcox.

First Deaconess’ – Sisters Garret and Wicks – were appointed in December 1868. In his honour the second building was called the ‘ Medcalf Memorial Baptist Church ’ and his daughter, Mrs. H. Fisher along with Sir Charles H. Goode, laid foundation stones, in October 1913. The Church after about seven years of planning and money raising was completed in 1914.