You are here: Home / History / Pioneer Families / The Pilmore Family

Extracted from an article written by Helen Harris in the Gullyian Vol.5 No.10 October 2005

In 1852 John Pilmore married Mary Cooke, from Eaton in Leicestershire , England
On the 7th ,14th and the 21st of December wedding banns were read in the Holy Trinity Church (Church of England) in Teigh for both John Pilmore and Mary Cooke. They were married a week later

In 1853 John and Mary applied to come to South Australia as Government Emigrants
They departed England on the 4th of May 1853 from Southampton on the Calabar’, a 754-ton ship, captained by Captain David Moodie and arrived a Port Adelaide, South Australia on the 15th of August 1853. On the passenge list for the `Calabar’, John was listed as a 22-year-old agricultural labourer from Rutland with a wife Mary who was 25 years old and a son William, who was 1year old

When John and Mary arrived in South Australia they walked directly to Modbury, with Mary carrying William on her shoulders and John carrying what possessions they had, a journey of some 10 miles N.E. of Adelaide.

The family had lived in a dugout on the banks of Upper Dry Creek, until their residence was erected on what is now the corner of Milne Rd. and Penny St. , Ridgehaven.

In the assessment records for the District of Highercombe 1853 it stated that John rented a house from Mr. Howard Blyth on section 1575.

In 1854 John and Mary’s second son George was born on the 7th of August.

In1855 John and Mary moved from the house on sec. 1575 onto a 40-acre section, Pt Sec 1579 on Dry Creek, which he leased from Howard Blyth and Morphett. Their first home was a dug-out in a bank of Dry Creek with the stump of a tree as a table. It was at this time that they were joined by John’s elder sister, Eliza and brother-in-law, Thomas Goodman Rawlings and family. John as an agricultural labourer worked for Mr.Giles, carting chaff to Adelaide .

As the years passed the Pilmores built their own home and had three more children, John, Richard and Rosanna. By 1865 they were leasing and farming the other 40 acres, the balance of Sec 1579.

In that same year his oldest son Williain who was the only child born in England died, and was buried along with two of his Rawling’s cousins under a stand of gum trees on the banks of Dry Creek

. The Pilmores continued farming and by 1868 the assessment records stated that John was leasing 140 acres of land from Blyth and Cudmore on part Sec. 1579 and 1576. By 1873 records showed that he was both occupier and owner of that same land.

When the Pilmores left the District in 1886 they had acquired 240 acres.

In that 10 years George, John, Richard and Rosanna had all married and were having children of their own.

In 1886 John and Mary Pilmore left their farm and with some of their children, John, Rosanna, Susan, Voll and Edgar went to live at Gerang – Gerang in Victoria and pioneered farming in that district.

Family legend states that Mary drove the wagon while John and their sons herded cattle through to Gerang-Gerang on foot, staying at Mt Monster siding (now Keith – SA) where John’s son Richard lived and worked as a ganger for the South Australian Railways. Over the years the family used Keith as a rest stop on their travels between South Australia and Victoria .

.Through many years of hardship they managed to build up their farm at Modbury and to make a better life for themselves and their 8 children. Although he left S.A. he returned home and retired here. His children all prospered and some went on to farm both here and in Victoria .

When Mary Pilmore died on the 17t” of September 1918, her obituary stated that George Pilmore was farming at Bow Hill, SA., John was farming in Gerang-Gerang – Vic, Richard was working for the railways at Port Elliott­SA, Rosanna was farming at Dimboola – Vic, Susan was living at Wood­side – SA, Voll was farming at Murray Bridge – SA and Edgar was farming at Nhill in Victoria. At the time of her death there were 39 grand children and 26 great grand children

John Pilmore died on the l8th March 1923 and was buried at the Dudley Park Cemetery, South Australia. 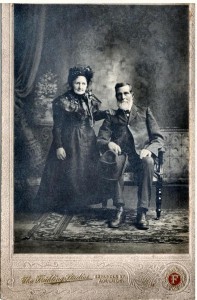 George and Mary, with two of their children Angus and Elizabeth May 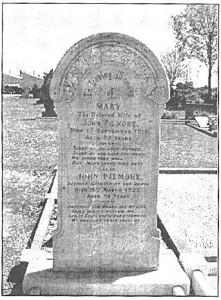