Anstey Hill is located some 18 kilometres north-east of Adelaide on the western edge of the south Mount Lofty Ranges near the southern boundary of the Anstey Hill Recreation Park—the Lower North East Road. It commands magnificent views across the Adelaide Plains to the city of Adelaide and the head of Gulf St Vincent. It stands at a height of 371.1 metres above sea level, some 50 metres below a nearby un-named peak. Why was this lower peak chosen to be named as a significant topographical feature called Anstey?

George Anstey (1841-1895) was an early South Australian pastoral and horticultural pioneer. He was born in London. His parents emigrated to Tasmania in 1823. George, after helping on his father’s property, married at 24 years of age and left the island to establish himself on the mainland. He arrived in the recently founded colony with some sheep early in 1838. By the end of 1841 he was one of South Australia’s leading pastoralists. 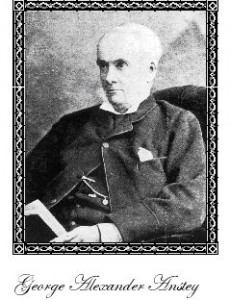 In 1840 he purchased two sections of land and began to establish his Highercombe Estate which he named after his father’s birthplace in Somerset, England. This name remains in district use today in the titles of the Highercombe Golf Club and the Old Highercombe Hotel Folk Museum. Anstey’s property was in the vicinity of the Golf Club which is located just over the crest of the range east of Anstey Hill Recreation Park. Highercombe Estate, with its vineyards, orchards and extensive botanical gardens became a horticultural show-piece.

Between 1842 and 1846 Anstey constructed what was initially a private road from Grand Junction Road to his newly established estate. This road, in reality little more than a bullock wagon and horse dray track, became known as “Anstey Hill Road”, that is the road up the hill leading to “Anstey’s “ place. It was used for 20 years, but was never gravelled. It crossed the crest of the then called Tea Tree Range in a saddle just north of Anstey Hill. It was later extended to Houghton and became a rival to the route up Tea Tree Gully, creating much controversy. In 1873 a new road passing across the south-eastern slopes of the hill was built and eventually named Lower North East Road. Its gravel surface was bituminised in 1930.

Most of the original earth and stone works of the original “Anstey’s Hill Road” are still clearly visible on the hill sides.
There is little doubt that the naming of the hill can be attributed to the linking of the name of a prominent early settler with the prominent topographical feature alongside of the “road: leading to his property.
“Squire” Anstey was never a popular public figure, probably because of his tendency to behave as a typical English squire or country gentleman.

When his father died in 1851 he returned to Tasmania with his family. They returned to England in 1854.
Except for brief visits, the last in 1868, Anstey never returned to live in South Australia.

However the name Anstey was to appear once more in the annals of South Australian history. Mortlock Library military records contain an entry that in the 22nd January 1879, a Lieutenant Edgar Oliphant Anstey was killed in action in Isandlwana, South Africa and than in doing so became the first South Australian born soldier to die in battle. Further searches of other records revealed that he was the third son of George Alexander and had been born at Highercombe on 18th March 1851. He was serving with the 1st Battalion, 24th Regiment of Foot in the Bristish Army in its greatest colonial defeat when 25,000 Zulu warriors slaughtered 1,357 of Queen Victoria’s men, mainly from the 24th Regiment and the Natal Native Contingent. The trail down which this heroic force fought its withdrawal is now called Fugitives Trail. It’s a long way from “Anstey’s Hill Road” which he travelled down as a babe in arms in the first and only year of his life in South Australia.

Why “The Gun Emplacement” on Anstey’s Hill

Because of its community position on high ground overlooking much of the Adelaide Plains and with a superb view of the city and the Gulf of St Vincent, the name given to this feature initially conjures up images of a huge gun mounted on a man made platform or set in a bunker -like structure with its barrel aimed westwards towards the sea. Its most likely origin, while still based on an image, has a reasonably factual derivation. The Macquarie Dictionary provides one definition of a “gun” as a long barrelled cannon, having a flat trajectory and one of “emplacement” as being “the space, platform or the like for a gun or battery and its accessories”. The near horizontal and tree-less (because of the thick impenetrable ironstone capping) ground on the natural land platform would have comfortably accommodated six, two pounder guns and their ammunition timbers.

The plateau was first recorded in a series of topographic maps of South Australia compiled by a Major W.H. Edmunds and published in 1926.The Mortlock Library records show that a William Herbert Edmunds served as a Lieutenant cartographer with the 5th South Australian Imperial Bushmen during the Boer War. There can be little doubt that the Major recognized this unique land surface as a naturally occurring emplacement for th positioning of a Battery of field guns of that earlier era and theatre of war.

The common use name “The Gun Emplacement” was declared as a geographical name in the South Australian Government Gazette of 22 May 1997.